[:en]Oh my god. This is a dog-lover’s paradise (and a paradise for the dogs as well I imagine).

I’ve never seen more dogs or dog owners in any one place than this, it’s amazing. Also, this is particular to Zaragoza: one of my Spanish tutors, Silvia, pointed out that she had never seen as many dogs in any one place as when she visited Zaragoza. So no, this isn’t even necessarily a Spanish thing, it’s a Zaragoza thing. Which I find fascinating. I’d love to know why (locals, please tell me in the comments!).

Dogs are so popular and beloved here that when stores don’t want you to bring them in, they have to put signs outside saying so. Lack of such a sign presumes it’s allowed, and even with a sign it frequently occurs anyway from time to time because the rule isn’t actually enforced unless the animal causes trouble.

A good example is my favorite local bar, Cafe Colonial. Initially I only ever saw a dog in there when it belonged to a blind person (such guide dogs must be allowed in all establishments open to the public in the U.S. as per a federal law known as the ADA). Then I noticed, from time to time, someone would bring in what was obviously their pet. Not a problem. Sometimes they were on a leash, sometimes not. I’ve yet to see any of them piss or shit on the floor, or otherwise cause trouble, so as long as they don’t do that they’re welcome. I’m fine with this, that’s how it should be: target the specific troublemakers and them only, don’t institute a blanket rule that stops the 5% that cause problems at the expense of screwing over the 95% who don’t.

Watch where you step 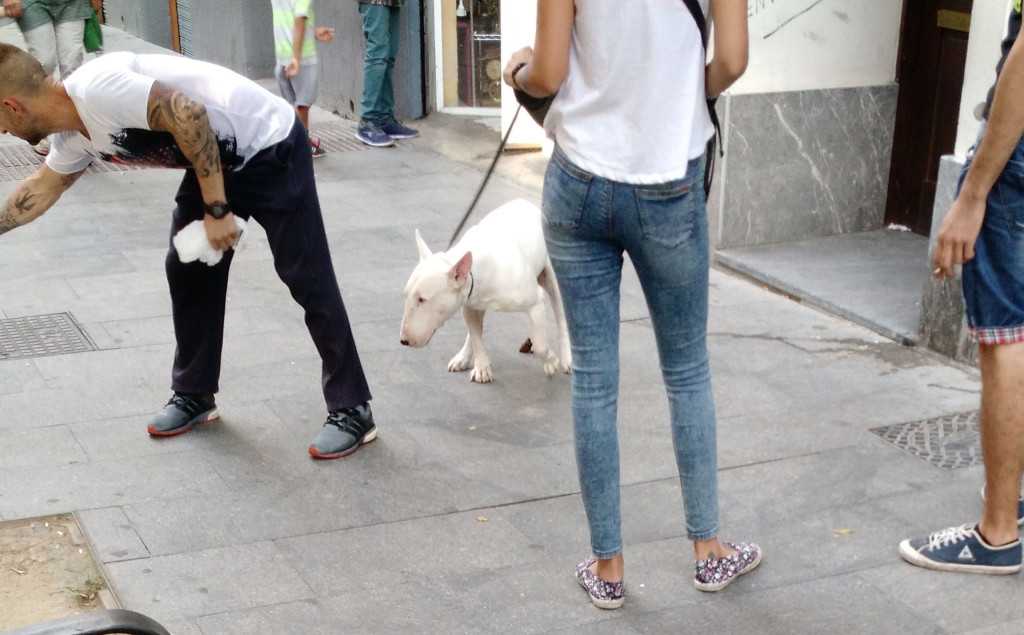 Someone’s dog pooing in the middle of the sidewalk, also note the puddle of pee to the right where it’s lifted its leg and urinated on the wall. Thankfully, this gentleman is in the process of cleaning up after his pet.

Yessss, of course. You knew this was coming. You have to watch out for dog poop and urine puddles on the sidewalks, though people here are, on the whole, very good about picking up after their dogs. It’s just that occasionally someone doesn’t and so everybody has to keep an eye out while they’re walking because they know that if they don’t then eventually they’ll tread in something and wish they had.

This is all I’ve got for now but I’ll be sure to upload some more photos and videos later of dogs in Zaragoza (I’ll definitely get some of dogs in bars, that’s just too much).