Are the Spanish Lazy? I didn’t think so until I came here…

And a bunch of Spaniards told me so.

No, not in my experience so far, from what I’ve seen Spaniards are very hardworking.  What I mean by that is not only do they work long hours but they also really try to do their job well and give the best service they can to the customer.  I’ve yet to experience anything remotely resembling poor customer service or a rude employee.

I have, however, heard from several Spanish people I’ve talked to that they think the Spanish in general are lazy and that has a lot to do with the terrible unemployment rate (over 20% overall and about 50% for young people) and generally poor state of their economy.

During my Oktoberfest excursion with my friend, Ana, I got to meet a couple of her friends who were Spanish but had been living and working abroad in Sweden for a few years now.  They were both of the opinion, when I asked about the unemployment rate and welfare state in Spain, that anyone who wanted a job could easily find one within 2 months let alone the 6 months during which you receive 70% of your previous salary from the government.  The problem, in their opinion, was that people either weren’t willing to work certain jobs that they saw as “below them” or they weren’t willing to move outside of their own little pueblo (small city/village) to another city/region in order to obtain work, and so would instead just live off the government dole because they didn’t feel like exerting the necessary effort and making the necessary sacrifices in order to find work.  In other words, it was mainly because they were just damned lazy.  This was their opinion.

The bar that I go to every morning for my usual ritual of two coffees and a pastry, Cafe Colonial, typically has two (sometimes only one) bartender working there each morning, and let me tell you: they friggin’ work.  They very rarely have a free second and are almost always behind on orders and scrambling to catch up, at least until the morning rush (“hora punta”, closest translation is probably “rush hour”) is up.

Today I went in and one of the poor girls (there are two, Suzana and Lidia, on the ‘morning’ shift which really lasts until 3 PM or so), Lidia, had a massive stack of dirty cups, saucers, and plates taking up a decent-sized chunk of the bar that she was trying to get clean – I thought the dishwasher had broken.  I asked her if this was the case and she said “Oh no, it’s from the morning rush, I just haven’t had time to catch up.  I’m the only one working.” (it was actually in Spanish, but that’s the gist of it).  She was the only one working. 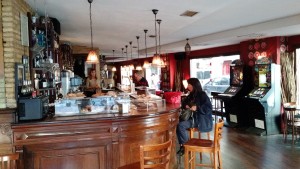 Cafe Colonial when it’s dead between the morning rush and lunchtime, with Suzana running the whole place by herself (today she was the only employee there from opening until about 3-5 PM until someone else took over).

Let me tell you something, this is is not a place that should only be staffed by one person.  In the U.S. you’d probably have 2-3 bartenders plus maybe a busboy (dishwasher) and a manager.  This one girl was doing it all.

This is also the norm in Spain.

What I mean is that most businesses here, from what I’ve seen almost everywhere I’ve been, operate on what would be known in the U.S. as a “skeleton crew”, that is the absolute minimum number of people necessary to just be able to keep the place running, and then only if they move like their ass is on fire and work their fingers to the bone.

Mind you, that’s one bartender, one employee in the entire joint (no managers, no busboys, no nada), for everyone you see there, and it’s only going to get busier over the next couple hours.

My theory as to why this is the case is the basic state of their economy.  Business is poor, people aren’t spending a lot of money.  Also, lots of people are out of work so it’s an employer’s market, meaning that there are way more people applying for jobs than there are positions, so employers can choose very carefully and then place really high demands on their workers without fear of them quitting because those workers know how tough it is to get a job and that there are a million and one other people waiting to happily take their place.  This leads to employers only employing the absolute minimum number of people they need to and then working them like dogs because:

A) They can’t really afford to employ many more people, if any, because business is bad, competition is steep, and therefore margins are already tight enough as it is, and…

B) They know those employees will work their asses off and take it, they won’t quit, because of the state of the job market.

This isn’t really any one person or group’s fault.  No, I’m not inclined to blame employers, it’s not like most of them are getting rich doing this, they’re just going what they have to in order to survive.  It’s not the employees’ fault, it’s not (entirely, at least) the government’s fault.  It’s a little bit of everyone’s fault, frankly, in my opinion…and I’m not sure what the solution is, or if there is even a good one.