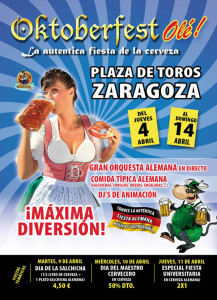 This is no longer a religious festival, for the most part (partly, yes, but it’s a minority part), it’s simply this city’s annual shindig, their yearly party. It’s an excuse to take some time off, relax, drink, dance, hold concerts and fairs, and generally “estar de fiestas” (basically, “to party”).

Oh, and it’s a huge grab for tourist dollars (or euros, as it were, since most of the tourists are still Europeans, mostly Spanish actually, though not from Zaragoza, which I’ll get to later). The Spanish economy is heavily dependent on tourism, it’s the number one industry in Spain, and I have no idea how important El Pilar is for Zaragoza as far as income for local businesses and the city government, but my guess is: very.

That said I want it to be clear that none of the above is a criticism (I don’t blame them at all), it’s merely an observation.