This deserves its own post, I’ve decided (apparently).  However, it is not a complicated subject, nor should it be purported as such.  This doesn’t need a master’s thesis so it’s not going to get one.

As mentioned previously, the Spanish typically don’t own coffee makers (if they have coffee at home a lot of the time it’s instant coffee); if they want coffee they go to the bar and order some type of espresso-based beverage.

Edit [10/29/2015]: A local friend of mine, Pablo, had a look over this article and corrected me on something, the Spanish do frequently have a coffee-maker of sorts that they’ll use in the mornings (anytime after that though and they’ll go to the bar) but it’s not the sort of automatic drip that we’re used to, it’s what’s called a “cafetera” (not even sure if there’s an English term, if there is I haven’t heard it – please comment if you have) that you have to heat up on the stove and makes what they call “cafe largo” (literally “long coffee”) and looks like this: 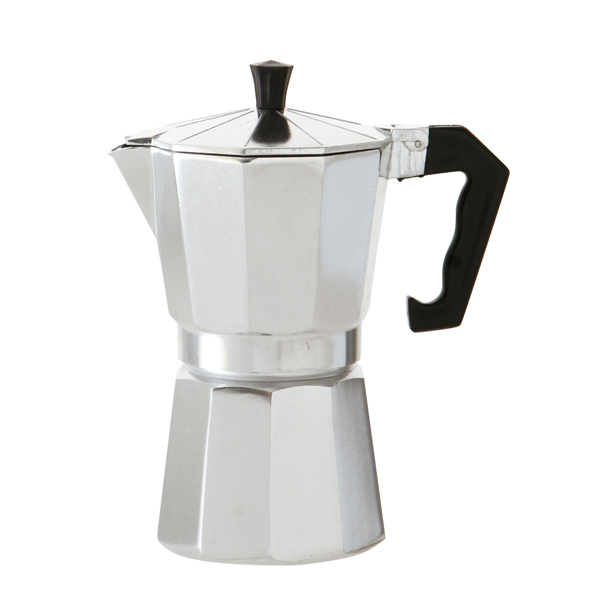 That said, just what types of coffee are they drinking in the bar and how do you order it?

There are really only a few drinks we need concern ourselves with here, though I will do a bit of preemptive ass-covering by saying that I’m aware that there are certain regions that have their own variations.  Typically the only things involved in Spanish coffee are espresso and milk (sugar is almost always offered on the side in the form of a packet included with your drink).

Occasionally liquor makes an appearance, especially if you’re a bit older and have nothing important to do (retired people love getting drunk in the morning, and having tried it myself I must admit it’s a hoot).

This is just a shot of espresso.  That’s it.

Oh, and the word you may find in the dictionary for “shot” (of a drink) is “chupito“, however that’s wrong in this case.  That’s only used to refer to alcohol – I know, I’ve been corrected multiple times by the natives when using it to try to say “a shot of espresso”.

The only way in which this drink may catch your attention if served to you in Spain is that it’s normally contained in a small, glass, shot-type glass instead of the usual ceramic espresso cup we’re used to:

This is a shot of espresso along with an equal quantity of milk, that is: equal parts espresso and milk.  The milk is usually (but not always) heated via steaming. 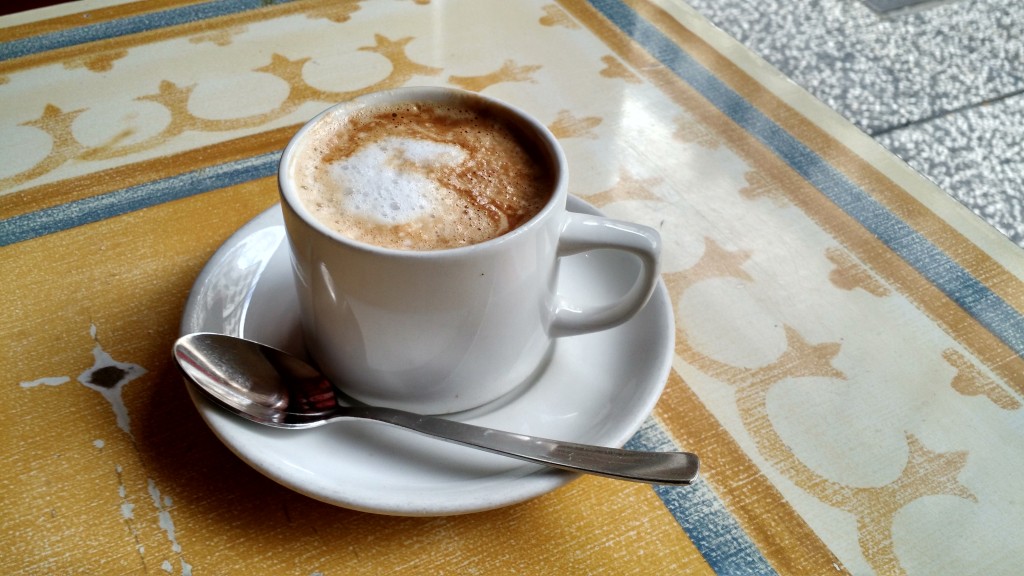 One of my two usual morning cafe con leches at Cafe Colonial, no sugar because they know I don’t take it – I’m sweet enough.

This is more typically taken at breakfast with a pastry (“un bollo”).  I usually have two along with a pastry almost every morning at Cafe Colonial for my breakfast.  I’m so consistent with this little ritual that the bartender (always one of two girls, Suzana or Lidia) will started making my first one as soon as they see me walk in the door.

This is a shot of espresso with a small amount of heated (steamed) milk added, like maybe a 4:1 ratio of espresso to milk.  It’s usually taken after meals (lunch/dinner) as it’s quite a bit stronger than a cafe con leche.  I usually have one after lunch every day around 4 PM, and that’s the end of my caffeine consumption as anything after about 6 PM will mess with my sleep (I go to sleep between 1 and 2 AM, I try to put at least 8 hours between my last consumption of caffeine and bed time).  Around 7 or 8 PM is when I’ll start in on the booze, usually a gin and tonic at the moment as Spain has reintroduced those to me after over a decade of not having one, but that’s another story.  I feel naked in the meantime without some sort of drug to depend on. 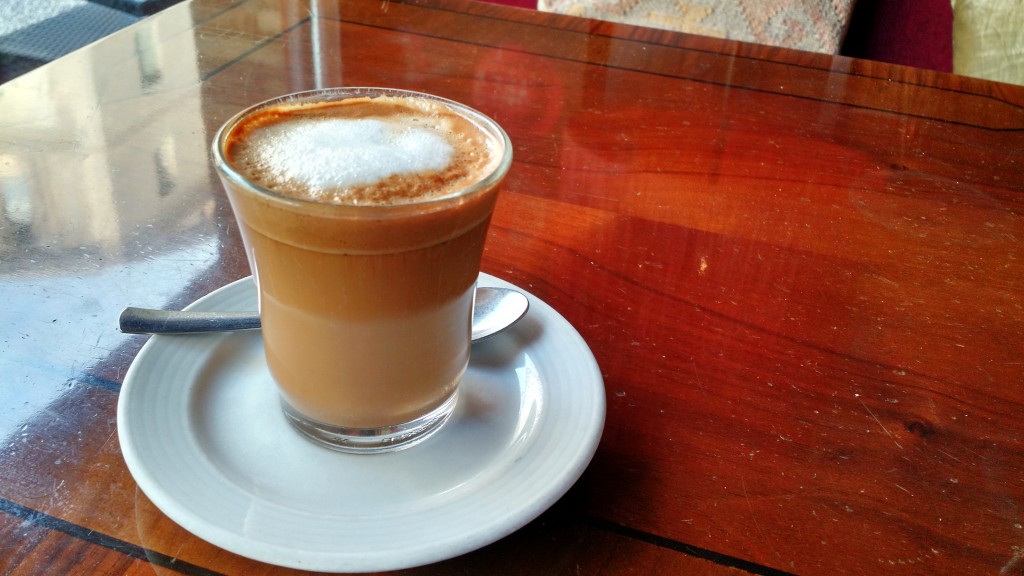 A cafe cortado from Cafe Colonial. Would normally include a packet of sugar.

This is a strange concoction I very rarely actually see anyone order.  I tried it once by accident (confused with a cortado).  You better really like the taste of coffee is all I have to say.

It’s a shot of espresso…intentionally made improperly…such that it’s stronger than it should be – yes, stronger even still than a shot of espresso already is.  What they do is use the normal amount of coffee grinds in the machine but less water than you normally would such that you get a particularly strong shot.

A carajillo I ordered at Cafe Colonial the other day along with the brandy she used.

This is a shot of espresso and some hot water to dilute it.  This is how they make something that’s as close as they can get to “American coffee” with the equipment they have here in Europe (espresso machines are common in bars and restaurants, equipment to drip coffee is not), hence the name.

Not my thing, it’s just diluted espresso.  If you really have a thing for black coffee, though, but straight espresso (cafe solo) is just too much, then I can understand how this would appeal to you.

Why?  It’s coffee-flavored milk.  What they do is heat some milk (via steaming with the espresso machine), then pour just a dabble of espresso in it to give it some coffee flavor (it doesn’t even receive a whole shot).

“Hielo” is Spanish for ice.  You get what it says on the label: coffee with some ice.

This is for people who like iced coffee (I hate anything coffee or coffee-flavored that’s cold, e.g. coffee-flavored ice cream), you get a shot of espresso (cafe solo) and a glass of ice.  You’re to pour the espresso shot over the ice and drink it immediately (otherwise the ice melts and dilutes it, plus the espresso goes stale very quickly).

I don’t think this is dumb, it’s just not my thing, to be clear.  If it is your thing, go for it, it’ll probably be really good.

Here’s a Spanish coffee flowchart made a couple years ago by a Spanish blogger to help you out: 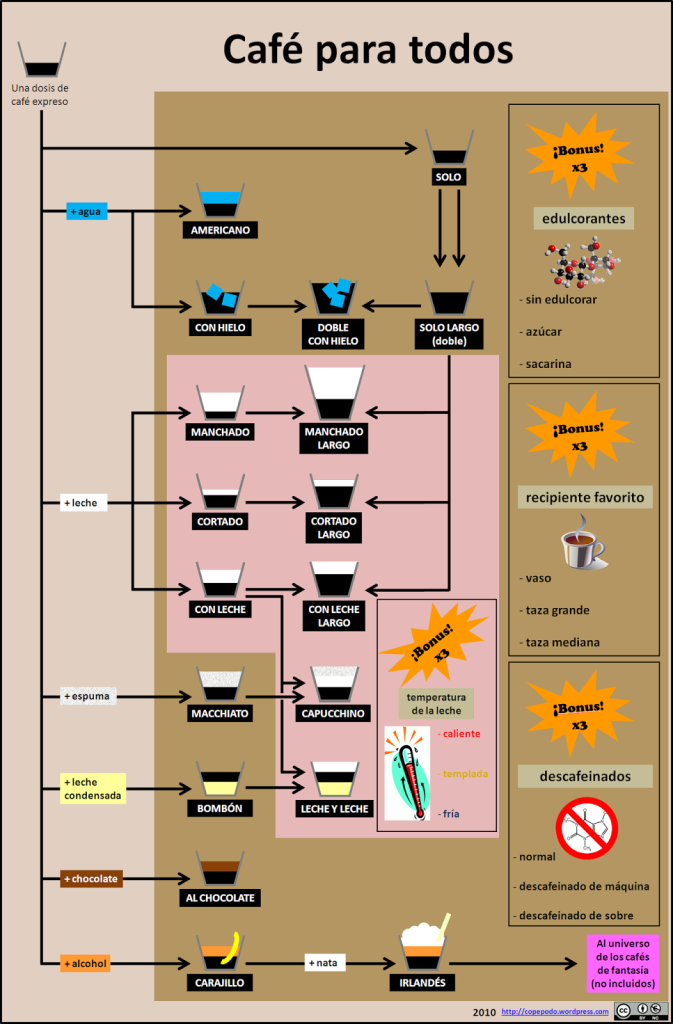 Also, here’s a much better (and prettier!) article on Spanish coffee than this one, you probably would’ve been better off just reading it to begin with instead of bothering with this one – sorry, but I just felt I had to address coffee in Spain…and hey, maybe this article was just perfect for you, maybe you care just enough about coffee in Spain to bother with this article but not enough to justify reading that longer one!  I’m an optimist.